I wanted to share with you today my latest nail tutorial currently on my YouTube channel. This is an easy way to do nail art, whether that is shapes or simple straight lines on nails, by using scotch tape. You can also use different shades of nail polish, here I used different shades of pink, and created simple cut outs from tape that you can recreate at home.

I recently began my YouTube channel, if you haven’t been there, please follow! I’m putting content there that is easy and that you can quickly do at home. As I myself am a stay at home mom with little time to do my nails.

I was listening just recently to an actress being interviewed, she was talking about her life struggles and all the difficulties she’s had to endure. At a young age, her mother had a life altering car accident, her mother hit the windshield causing neurological trauma, changing her families lives forever. Ultimately due to the accident and her mother’s condition, the children had to be taken away, her two sisters were sent to one home, her two brothers to another home and she was placed in foster care for a few days – she was 13 years old. She talks about one of the people that inspired her, her social worker and getting to the tenth grade and not knowing how to read. This is just a small snippet of her life, of her mother and of her childhood. Her name is Tiffany Haddish, a comedian and actress. 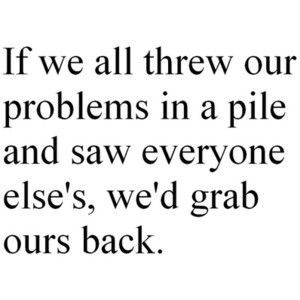 This interview was phenomenal. And I say this because often times I think that my life is the only one that’s complicated, rough, bad and too difficult to handle sometimes – to even understand. And then I listen to testimonies like these that remind me, that I’m not alone. I’m not the only one with problems, with issues.

We all have a past, we all have and/or still going through things that are going to test us to the core of our faith, perhaps a diagnosis, a separation or job loss. Faith? Yes, that what seems unattainable but very possible. It helps us rise in times when we just don’t see hope, when we don’t see light because all we feel is pain. Hope? Yes, that’s when we begin to desire to get through the bad because we realize that the light is brighter than the darkness.

The thing that allows me to connect with people is when I see past what my eyes see and I listen to their life’s journey. I see that we’re all different, we come from all walks of life and born from all parts of the map. Yet, there’s one thing that connects me with you, the fact that you and I have been through difficulties in our lifetime. In some cases, the difficulties are bigger while others are minor, but they’re life altering nonetheless. Yet aside from all that, we realize that we’re trying to be the best version of ourselves and living the best life that we can – a connection like no other.

I’ve realized that embracing where I am today, is accepting my journey. The difficulties I’ve had to face has brought me to this day – where I am today – I will be thankful for today.

There have been so many moments in my life where there has been self doubt. The moments where I think of doing something and I hold myself back. Because as the saying goes, ‘I am my own worst critic.’

The negative thoughts often are too hard to avoid and the positives are often hard to believe.

If I’ve ever thought of starting to live, to breathe, to be free in my own skin, I think that time is now. The time to take the leap, the jump, that jump that’s going to take me to where I want to be, that time is now. I was reading a story on a Texan woman police officer, she was and still holds the record for being the oldest woman to ever been sworn in the academy in her city, at the age of 54. Her story was both astonishing as it was inspiring.

In the few months that I’ve been blogging many have touched my heart, inspired me and motivated me, as living with Chiari + Syringomyelia can really take a toll to ones spirit. But as I battle my days with chronic pain, this post by Real Life Of An MSW was a great reminder of the abilities that lies within a woman. It reads, ‘a badass woman starts her projects …. doesn’t wait for an invitation.’ This here reminded me of how regardless of my physical pain, everyday I still need to continue to push through – keep pushing. Since I began my journey here – I’ve surprised myself more than anyone, I’ve open an online shop and just very recently Simple Nail Designs – my YouTube channel.

What the mind can overcome when the will to thrive rises.

A Badass woman doesn’t wait for people to ask her to do something or notice how great she is, she says. She starts her projects, take up space, or raise her hand because she doesn’t have to wait for an invitation. -Jennifer Baumgardener Positively Purging-I welcome your feedbacks in the comments and your likes […]

via Badass — Real Life of an MSW