The month of September is Chiari Awareness Month. In May of 2013 I was diagnosed with Chiari 1 Malformation and Syringomyelia and my life since then has changed – tremendously. I remember going recently to a store, because it’s a place I visit regularly – they’re a sweet Vietnamese family, I’ve got the chance to get to know them. We were discussing Chiari the last time I went there, one of the daughters said, ‘besides going to the hospital when I was born, I’ve never been there.’ I was speechless, I know my way around – just about, every hospital in my area, I even know what hospital not to go to because they lack ‘my’ department – neurology. The difference between someone with Chiari Malformation, Syringomyelia, among many other different illnesses, is that we know too well what is like to be at a hospital – while others don’t. It’s an unfortunate truth. 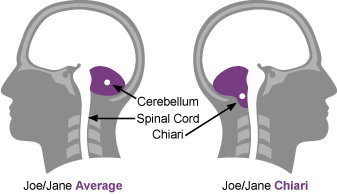 There are currently four types of Chiari Malformation and each are classified by the severity of the disorder and the parts of the brain that descend into the spinal canal. As you can see, I have type 1, this is when the lower part of the cerebellum called the cerebellar tonsils extends into the foramen magnum. This is where only the spinal cord would otherwise pass through. Chiari unfortunately goes un-diagnosed, and is first noticed during adolescence or adulthood, usually by accident during an examination of another condition. As it happened to me, I went into the ER in May of 2013 for what was suppose to be a quick ‘trip to the ER,’ but turned out to be far more serious than your typical ‘headache.’

What surgeries have I had for Chiari 1 Malformation and Syringomyelia? As for the Chiari, in May of 2013 I had emergency posterior fossa decompression, here the surgeon created more space for the cerebellum as this relieves pressure on the spinal cord. At this time the surgeon also made an incision on the back of the head and down the neck area, and removed a small portion of the bone at the bottom of the skull, this is called, craniotomy.

In November 2017, for the Syringomyelia, I had spinal laminectomy in which they placed a syrinx shunt – this shunt (a flexible, tube like device, according to my surgeon it’s also less than the size of a hair strand in diameter) will remain in my body forever. The syrinx shunt diverts the fluid from the syrinx into another space in the body where it can be absorbed. There are a few locations where the fluid can be absorbed and this is what differentiates one shunt from another. The shunt I have is absorbed in the peritoneal space, also known as the abdomen. The space location is determined on the patients case and the surgeons personal preference.

Today, I’m still living with a number of ongoing symptoms such as difficulty swallowing, headaches, vertigo, imbalance, difficulty concentrating, etc. which also includes chronic pain. I need to be monitored for changes that can occur in the CSF flow or cerebrospinal fluid. I’m currently experiencing severe numbness on my left side, especially in my face and tongue – you’d never know it if you’d see me. However, I finally have a great neurological team that is helping by monitoring me, via MRI’s and managing my pain levels, via medication, as best as they can. It’ll always be a process, but it’s a process that with patience, it’s as tolerable as it can be.

The perfect cure for worry, is to trust in God.

And in light of my series ‘Happy Meme Monday’ I’ve decided to include some Chiari Malformation memes. Enjoy.

These memes – sum it all up. Have a blessed Labor Day.